While working on previous CMake experiment I noticed several places that looked suspiciously suboptimal. As in case of any performance considerations everything should be measured so I decided to run it through a Heaptrack and check what’s going on.

I used Heaptrack 1.2.80, CMake 3.18.1 with debug symbols and this barely empty CMakeLists.txt:

Let’s take a look at what heaptrack gave us: 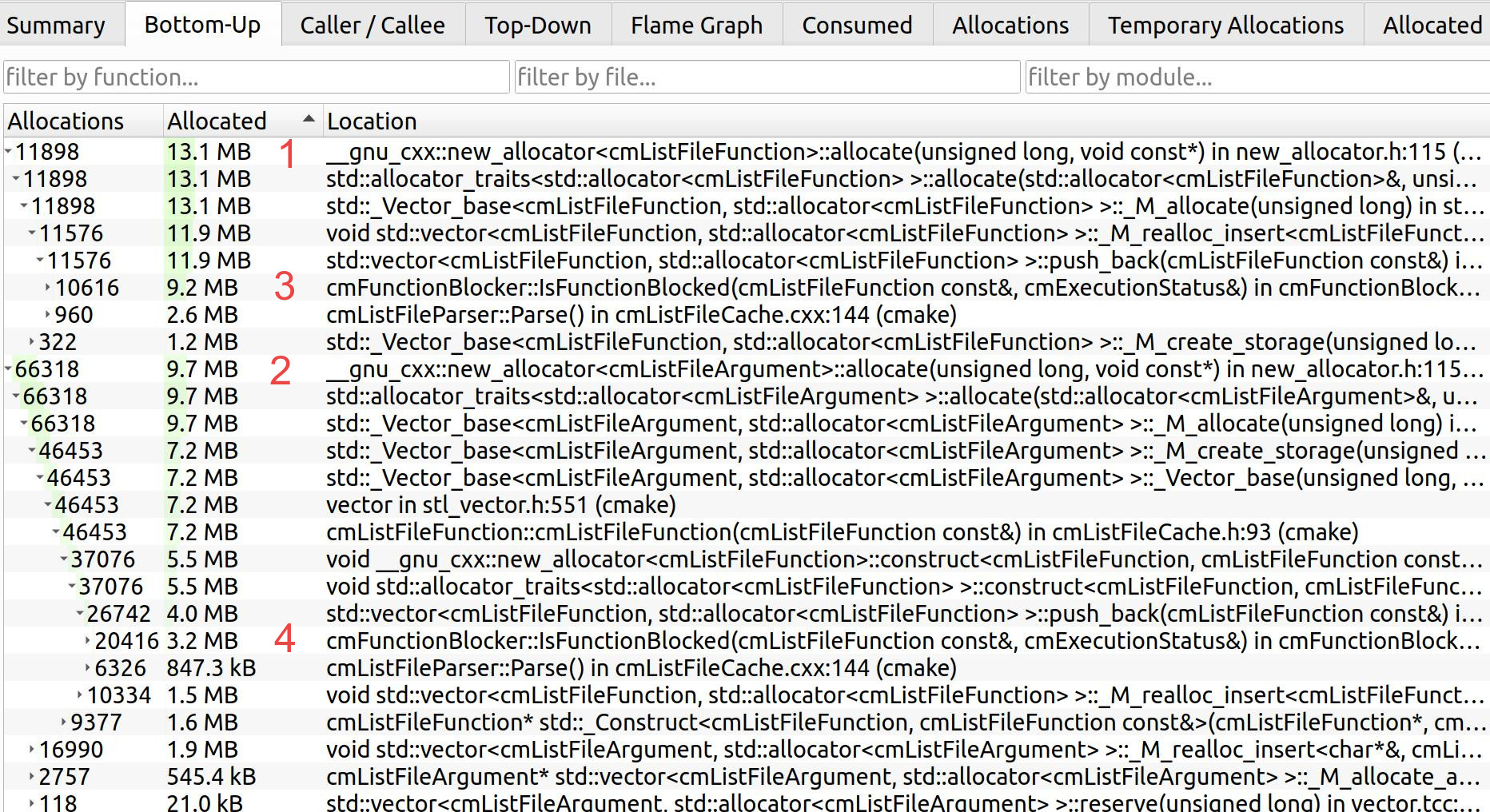 These types are used to represent parsed code. Here are their simplified definitions:

For example, representation for this code

When the file is parsed, cmListFile contains all its commands. After, they will be executed in a row.

Everything in CMake is a command including things like functions, conditionals and cycles. Hence, it needs a way to represent a scope, e.g. it can’t just execute a function body on its first occurence. Instead, it needs to collect function’s inner commands as its body and create a new function definition. To achieve that CMake has function blocker which has that IsFunctionBlocked() function:

When starting command(e.g. function(), if()) is executed, it starts to collect scope body using IsFunctionBlocked() and when ending command(endfunction(), endif()) is met, it does something with its body. The important moment here: once the body is collected, it will never be modified.

As you can see it copies functions inside. Consider how this simple code would be represented:

Here’s how it’s stored in memory:

That’s the problem, blockers copy same commands multiple times depending on the code structure. It’s quite expensive because each command contains two strings (for its name) and a vector of strings(for arguments). Moreover, it does it multiple times. Inner blocker are populated each time outer one is executed. In the above example, if-blocker will be recreated again on each f() call.

My first thought was to store raw pointers in blockers but it doesn’t work. When it reads dependent file(via include()) it really needs to copy cmListFileFunction because corresponding cmListFile is destroyed after parsing but we still need to use included functions. So the actual solution is to store each command in a std::shared_ptr to make copy cheap:

Second place where it does unnecessary copy of commands is in ExecuteCommand() function. Although it’s not critical, I still think obviously unneeded copy operations should be avoided.

As you can see, commands are stored in a std::function and during execution that object is copied. Why? Because commands could be redefined, thus currently executing function object might be reassigned and the following execution would be UB if it’s not stored anywhere. Copy of std::function usually involves copy of its control block where the actual Callable is stored. Most built-in commands in CMake are stored as a raw function pointers so their copy is relatively cheap. But user-defined functions (function()/endfunction()) contains a vector of commands in its blocker and its copy is not cheap. Again, solution is to use std::shared_ptr:

No more excessive copies of vectors of strings. Both solutions could be even better with something like boost::local_shared_ptr which avoids synchronization overhead.

Now top heap consumers(1 and 2) are related to std::string operations. Some of them also could be fixed but it requires more effort to get significant improvement. Total bytes allocation decreased from 65MB to 39MB. Number of allocations decreased from 394k to 280k.

For more complex configurations the economy is of course lower. Partly because there’s an old parsing routine that allocates a lot and becomes the major memory consumer(I’ve fixed them in the next post). Here are results for heaptrack itself and Google benchmark configuration step (total allocated bytes (number of allocations)).

I’m not a fan of deep optimizations in a project like CMake where resources are not scarce and actual execution is rare. However, in this case it’s not really an optimization, just avoidance of unneeded copy operations, just the C++ way of doing things.